Needless to say; I agree completely! Purchased, but unfortunately, don’t use GW.

@zeker, I feel your pain and have valued your contributions to this seemingly futile cause.

I just wanna know why most people don’t see the need? Has the Internet, App World and Dumbing-Down of interfaces and advanced needs really got so bad that simple functionality is lost forever?

the post where it is suggested in the main feature request topic - FYI, a continuation is at a later post:

For everyone that sees these messages looking for this “basic functionality feature”, please go to the link and “Like/Love” it also.

I like your message from ages ago that said:
“I guess we’ve got a catch 22 then, Ken. If I had found GW more useful and was using it, I may have frequented the forum more often and seen that [the survey/etc].” - My view exactly!!!, And I tried to say similar in one of my posts - i.e. how can one respond to a questionnaire locked away in a basement that one doesn’t frequent, behind a door that says “Not Working”.

It’s a strange world that makes it so hard to find/discover things and have to “like” something rather than it be common-sense/logic and “cool” added for creativity/functionality. One would hope that creators/developers would not principally rely on pure “social” suggestions/feedback ratings but would also have some gumption to create and steer without relying on the mass popular vote (isn’t that where politics keeps going wrong these days!)

I love the concept and looks of GlassWire… it’s inspirational, visual and attractive! But I won’t install it (or buy it) because, err, it’s not visual in a really really basic and fundamental way… - go figure ! … (somebody, please explain why I don’t get the GW methodology)

I’m really not sure why the developer(s) ignore or can’t grasp/add the (basic/fundamental) “feature” that I (and others) crave so much? It’s like GW were given some code from the future and don’t know what to do with it.

In so far as pandering to user’s needs and extrapolating future needs/development, if GW ignore advanced/basic requests/features/suggestions, then all I can say is: Garbage In/Garbage Out.

Sorry to sound so strongly, I’m not normally like that, but given a brilliant product, it’s so sad to see it fail.

I check the feature requests myself, and I did not notice that this feature was requested a lot as @Remah showed. So, perhaps I should have paid better attention.

We also have an Android app and I do all support and check all feedback for that app and I have never seen anyone request this feature there, and the functionality of that app is similar to Windows.

For me personally, if I want to see a less changes in the graph I will make the time period of the graph longer… then it changes much less. If we had a static slider it sounds really nice, but with real world usage it may cause the usage to get so large the graph is just completely filled up, or the network activity will be so small you can’t even see it. So you’re probably going to spend all your time adjusting the graph constantly… but I guess there are other apps that work this way so perhaps I’m wrong.

Anyway, I don’t recall anyone asking for this feature for awhile so that’s why we’re not jumping to add it but it’s like anything else on GlassWire, and if a lot of people request something we’ll consider it.

I take exception. I have written to Glasswire about this a few times (in the past 3 years.)

It is not difficult to fix the vertical axis.

It makes sense to immediately visualize what the bandwidth.

Each time people ask for it, Glasswire gives an excuse not to do it.

I was a programmer and realize (as you would) that it does not take much to implement. All competitive products have it.

Please give us a 2019 present and implement it.

Thanks and a Happy new year

I check the feature requests myself, and I did not notice that this feature was requested a lot as @Remah showed. So, perhaps I should have paid better attention.

Anyway, I don’t recall anyone asking for this feature for awhile so that’s why we’re not jumping to add it but it’s like anything else on GlassWire, and if a lot of people request something we’ll consider it.

I’ve requested it several times over the past two plus years and have largely felt ignored. I’d given up until receiving notification when Remah tagged me in his post. The first time I am aware of this being requested was four years ago: Suggestion - fixed scale for graphs. And you said:

Great idea Ghosttie. Our team reads this forum in detail and we’ll see if it’s possible to make that work.

Thanks for using GlassWire and taking the time to give us feedback here.

The thread we are now posting in alone has requests going back years. It even refers to and posts a screen shot of Networx (https://www.softperfect.com/products/networx/) from a year ago that works this way despite your claim that you had not been aware of any. (Networx is also what I now use for the graphical display.) So, perhaps more attention is warranted. It seems you rely more on bias of what you think things should be?

And, you encouraged use of the feature feedback thread for this. Take a look at the top liked posts (not that people have used this system reliably). Mine, referenced here, was among the highest number of “likes” among all the posts according the the system you initiated and encouraged and simultaneously seemed to disregard. Ironically, you were one of the people that “liked” my post in that thread!!

Please take a look at this feature request again.

We also have an Android app and I do all support and check all feedback for that app and I have never seen anyone request this feature there, and the functionality of that app is similar to Windows.

I’ve not used the Android app.

It seems such a simple request, just make the vertical scale fixable at user chosen certain levels of unit and maximum peaks.

If there can be a simple toggle/click to zoom in on the details (as we see in GW now), then all the better.

For me, most of the time, I just like to see current performance right now to confirm everything is working as expected, not every minutia of what is happening bit by bit. Sometimes though, I do like to examine each thing going on in the way GW currently shows, but that’s rare and scary when one realises how much network activity is actually going on, but mostly can be ignored.

An easy to see current and consistent overview would be brilliant to see in GW that otherwise looks fantastic. 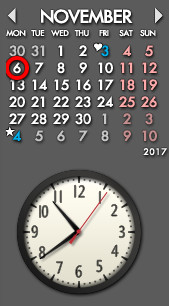 Can you share what program provides this nice clock/calendar Mr. Artist? TIA

Sorry, I no longer seem to get email notifications from this forum - I only noticed your question when I logged back in to see if our request for the blindingly obvious fixed scales had been implemented yet (I doubt it).

Checking my GW account settings seems like all notifications got turned off - I don’t recall doing that myself but maybe I got fed up with how GW is ignoring the requests?

Anyway, to answer you question - the clock is a Win7 Widget. Widgets sadly seem to be a thing of the past even though they were so useful - I have a few running all the time showing CPU, memory and network info at a glance - to do anything similar on Win10 seems impossible these days - so much for progress!

The calender is a brilliant piece of software I found a while ago (not a widget, so okay on WIn10 I guess) , it’s called Rainlendar. it so simple in appearance but with lots of configurable options that I can also have on-screen like To-Do lists, Events, etc.

The picture shown here is what I have in one corner of one of my monitors - I also have the Networx panel next to these (as shown above in this thread) which neatly and clearly shows me my (fixed scale) network traffic - it would be nice to replace it with something like GW, but until they can show a scale that doesn’t keep jumping all over the place out of any known context, scaring the hell out of me, then Networx is what I’ll stay with.

Have GW added fixed scaling yet? 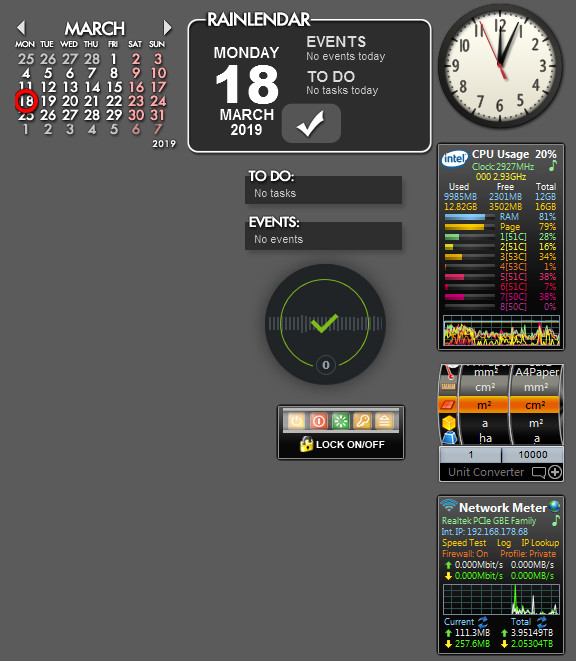 Thank you. I’m on Win 10. Will stick with my combo of ClocX and Desktop iCalendar. Both are aging, but still run. I also use Networx for the visual graph, larger one on desktop, mini in the taskbar.

Here’s a snip of the right side of my screen: 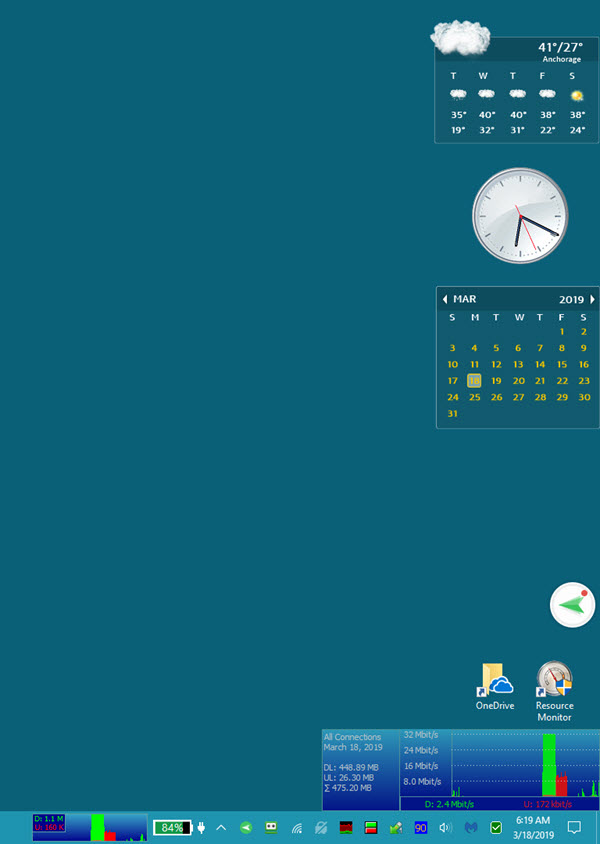 Found myself back at this site to see if there’s any mention of fixed scale being included yet - No it seems, but I noticed this in the manual:

The scale of your graph may change occasionally due to your current network usage but it’s nothing to worry about, unless you don’t know what you’re downloading that’s changing the scale. If that’s the case click the graph by following the “Clicking the Graph” instructions above and figure out what you’re downloading for peace of mind. That’s why we made GlassWire, to help you understand what’s happening with your network activity.

Ironically, that last sentence is exactly what GlassWire is NOT doing if it can’t fix the scale so that I can instantly see out of the corner of my eye via the graph if there’s a massive unexpected spike, loss of activity or even just if something has finished downloading, as also evidenced by the author having to say “peace of mind” and “nothing to worry about” when referring to the ‘scale’ changing (but not the graph heights) - surely fixing the scale and varying the graph is the logical way, and so much easier to see at a glance than having to constantly think about what scale and relative units it’s currently in!!!

I have to view the scale and do a mental calculation every time I view the graph.

I’m still waiting, coming up to 5 years, for fixed scales. For me, I need fixed scales primarily for the reason I quote above.

I don’t understand why there is such reluctance to provide a simple and basic feature that makes the graphs useful for so many of us.

After our backend update is out and our Mac version is released we plan to do a UI refresh. Then we can look at adding more graph options, views, and features.

Thanks for your feedback, it is not forgotten.

I wholeheartedly agree with @zeker & @MrArtist.

The graph as it stands is in effect, nothing more than a simple indication of relative bandwidth. It is not a true indication of the actual bandwidth, as you can never trust the values without taking the additional time needed to conduct a deeper inspection & verify what the current scale is (& that can change more than once while you are looking at it!)

@Ken_GlassWire - PLEASE implement an option to place a custom FIXED scale on the graph, or at least two or three scale options. I really don’t care if you keep the default mode as the variable scale…

All I care about is that I have the option to switch to my personal preference as & when I desire.