Here is the chart we made for Steam. Thanks! 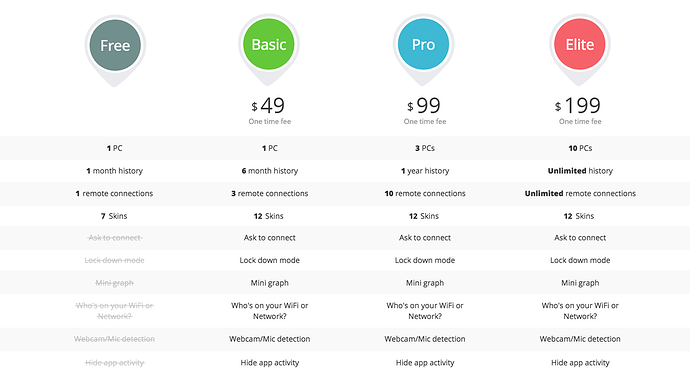 I started with the free version, bought the Basic version and then moved to the Elite version. While the last six “features” in the chart above show what you buy over the free “features”, normal operations for the free version are the same as for any of the paid versions. The MAJOR differences between the free and any paid version are in the numbers of PCs and the numbers of remote connections that you can make SIMULTANEOUSLY. For example, with the free version running on two separate PCs, you can set each PC to a be main Glasswire client with the other PC as a remote connections. So each PC can be utilizing all Glasswire capabilities including remote monitoring – they will be simply missing those specific six “features”. Moving to a purchased version, primarily allows you to use more PCs with the one license and to monitor and manage the purchased number of remote PCs.

IMO, the number of skins and the length of the history is irrelevant for a user who is testing Glasswire for the first time. Until that person has the free installation for more than one month, even the history will look exactly the same with the exception of the titles on the Graphs, etc. I agree with the requests for new skin options however they are implemented, but frankly after trying all 12 skins, I personally went back to use the default colors (I do look forward to a “dark” set of skins or color options.)

Edit: Another post reminded me that the free version also does not have a working Network tab. Frankly, in this version the Network tab is near useless and is also misleading with the info provided for the paid users, so not much of a loss. As stated by Glasswire reps in a number of posts, the should be a new version with improved Network tab soon. At that point, Network could become a significant capability of the paid versions.

I would not have bought GlassWire without being able to try the free version first.

I moved from free to paid because of the Network view and more remote connections.