I’ve had a lot going on recently (that includes getting a new knee) and have had some trouble just keeping up with Glasswire (as well as other things). No problem – as long as the Glasswire team just keeps on with the updates.

Catching up (again) today, I found the latest update for 1.2.100. And I also got a notice from Glasswire with a link to the download. Nice – I haven’t seen that before (but I usually learn of the update within hours on the forum, so maybe I never had the chance to really be behind with my update procedure).

All appears fine with this new release, but there are some items of interest to me and, perhaps, to the team. I have made it a point to NOT select the “Clean” install option in most of my time with Glasswire. As usual, this time I got a good install and found my complete history – but that is somewhat amazing! (See the capture below.)

I actually started using Glasswire in Oct 2015. Between then and Apr 2016, there were a lot of changes and I did new many installs and experimented with saving various history files to help with debug and to be sure I was getting what I wanted from the product. Those early month’s history got lost because I had no real use for them, but by Apr last year, I started trying to keep the history. Things are little cloudy, but my memory says that a Glasswire change in Dec 2016 led to my losing the Alert history, but the Usage has continued straight through. As can be seen in the clip below, my usage extends back to mid-Apr 2016, the extra Usage for the Win10 release testing shows during July, and the loss of my Alert info shows in Dec. Another issue on my system (which I frankly don’t remember at all) caused loss of the history data during the second week of March this year, but because I had a copy saved, I was able to restart Glasswire with an older history file and pick up again about a week later. (That gap can be see by the gap in graph shading at that time. On my own machine, by closing the time bubbles to zoom that period, it can be seen that the timeline data is not shown during that week.) 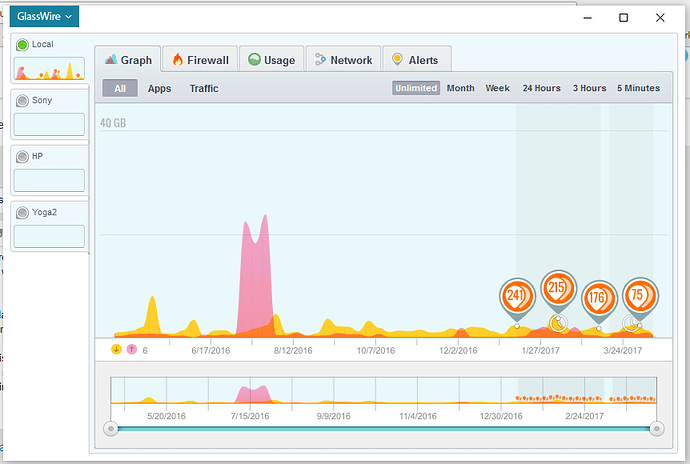 One odd thing is that my recollection was that I had lost the history prior to that Alert loss in Dec 2016. I guess that’s just poor memory. Regardless, I’m not sure how many other Glasswire users actually have Usage history going back a full year. “Unlimited” is a good term.

As a side, when I worked for IBM, certain business critical information (such as the Y2K transition – mellow though it proved to be) was required to be maintained for at least 11 years afterwards. (HA! Now past the statute of limitations!

) I guess Glasswire can handle that…

The graph looks neat! Too bad we’re missing those extra alerts, and it was our fault!

Thanks for posting this.

Not tragic on alerts. was that when the DB format changed? Or was that change why I dropped the Usage?

The good part is that your changes are always more good than the impact of a loss.