I’ve installed GlassWire fairly recently, I’d say last week and at first everything was fine but today I noticed my laptop was unbearably slow and heating up a lot even though I had nothing open other than a web browser. After opening Task Manager about half a dozen “GlassWire Computer Idle Monitor (32 bit)” background processes each consuming about 15% CPU with 100% CPU usage in total.
Weird thing was GlassWire wasn’t even running as I had closed it completely by clicking “Exit” on the context menu that shows up when you right-click the GlassWire notification tray icon on the taskbar.

Even restarting the computer wouldn’t do anything as the processes kept popping back up and using up all CPU. Finally after individually terminating all of those background processes in Task Manager my computer was able to regain functionality.

I have attached a screenshots from the Task Manager. I’m running GlassWire 2.2.210 in Trial, mainly use Google Chrome as my web browser and NO I AM NOT using BitTorrent, VPNs, or any other such software that could cause this. Its running fine for now but if this doesn’t get fixed I will be forced to uninstall GlassWire which I really don’t want to because other than this issue I love this software, its really great. 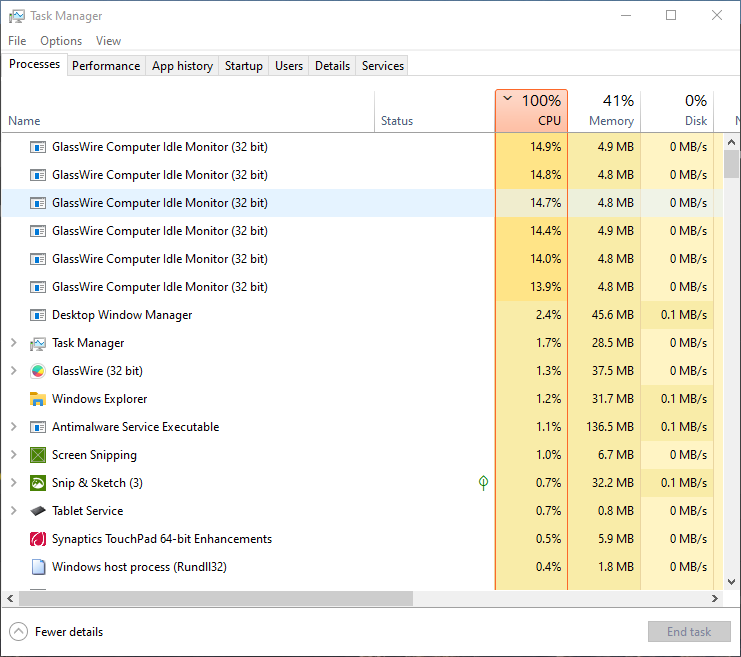 GlassWire should only have one Idle Monitor, not 6. There is something wrong there for sure! I don’t recall seeing this problem before.

I will discuss with our team and see if they have an idea because this is a new one for me.

Yeah and in any case it shouldn’t be hogging up 100% of the CPU, even after I completely disconnected from internet, restarted my computer etc.

And thanks for the swift response, hope you guys are able fix this! I’m always available if you need any information about this issue.

Well, I hate to sound like a broken record but since I have never seen this issue before would it be possible to try a clean install?

Go to add/remove programs and uninstall GlassWire. Please do not use an uninstaller app because it can cause strange issues like this by not removing our services correctly.

Go to the Windows task manager and look at the Windows Services. Are any GlassWire services left? They should all be gone now.

Did it fix it?

Well I did uninstall using the control panel add/remove programs and even deleted the GlassWire folder in the “Program Files” Local Disk C: drive and yet those gliched Computer Idle Monitors hung around. I terminated them in Task Manager and clean installed GlassWire but they showed up again, so I killed the processes in Task Manager again yesterday and since then its working fine for now.
This isn’t such a huge deal for me its just the first time it happened out of the blue it was quite frustrating but now its fine I can deal with it. Still I’m just putting this on the forum so that maybe you guys will be able to do a permanent patch on whatever bug was causing the Idle Monitor to go berserk and ensure no one else has to face the same problem in the future.
Another thing to mention, I have two windows user accounts on my computer and both times the issue started after I switched into the other account so maybe something about switching user accounts while GlassWire is running is causing this?

If the issue happens again please let me know. If you can reproduce it then I can provide instructions for logging. Once logs are enabled you can create the issue and send them to us. We can then fix the issue for everyone.

Ok I will see if I can reproduce this deliberately.

Also I’ve noticed that GlassWire Control Service (32 bit) is also consuming a lot amount of CPU, around 30% to almost 35%, especially when streaming videos or downloading something (games, files etc). Its not staying at that level all the time, only for short periods but even so is it supposed to even reach that high? And just like in the previous issue with the idle monitor, quitting/exiting GlassWire by clicking on “Exit” in GlassWire’s app menu doesn’t get rid of the background process which continues to consume CPU for a while even after the foreground app is closed.

We found a bug where while in “ask to connect” mode some apps will do weird things causing GlassWire to do this in some rare cases. What firewall mode are you in?

What version of GlassWire are you using if you go to our top left menu and choose “About”.

No, it is not normal for GlassWire to use that much CPU.

“ask to connect” firewall is off as my trial has ended. 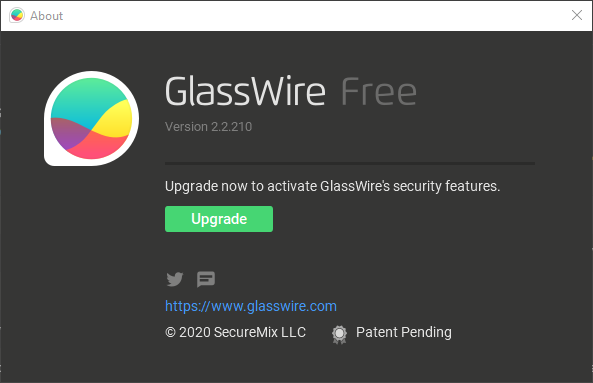 Strange. Would you like to email us some logs? It can help us find the cause. Please let me know and I can give instructions.

I am also seeing high CPU usage by GlassWire Control Service (32 bit) - about half of one logical processor at all times.

my computer is working fine und glasswire to, but when i block 2-3 apps i get very hight cpu usage to. So i disable in windows firewall manualy and disable firewall on glasswire

An older version of GlassWire had this issue with some games. If you go to the top left menu and choose “About” what version does it say you have?

I was experiencing this on the previous version, so I updated to the latest stable: 2.2.210. No change.

CPU usage is okay after reboot. After about a day or so of uptime, I’ll notice that GlassWire Control Service claims about one half of a logical processor, and never gives it up until the next reboot.

Do you use Bittorrent?

Not within the last 6 months.

If you go to our graph/apps while this is happening, is there an app using an extraordinary amount of data or acting strangely?

If you don’t want that then mark the app as Incognito. Click on its icon, then “more” then make it “Incognito”.

I did take a look at the graphs last time and didn’t see anything unusual. I rebooted this morning, so CPU usage is currently nominal. I will report back next time it happens.

Next time it happens please look at graph/apps in real-time and see if there is anything funky going on.

yes that make sense. Thanks problem is solved. I think most people dont know that. I suggest to put some kind a warning on something in app so people can see. I am sure that will solve lot problems.