Issue with Glasswire and Flight Simulator

I’m glad it’s working for you. Hopefully @shadeless will see the same. Nice skin by the way.

Ok so I downloaded the new GW version and flightsimulator.exe is now shown and traffic is logged - but only when Firewall is disabled! So not really fixed unfortunately

Here is what I did/steps to reproduce:

So in conclusion, as soon as the firewall is turned on, traffic doesn’t get registered and the game has no connection. When FW is turned off, everything is fine and paradoxically, the traffic is registered.

One strange thing I noticed is, that the application path is messed up or doesn’t resolve like the other apps, Virustotal analysis also fails: 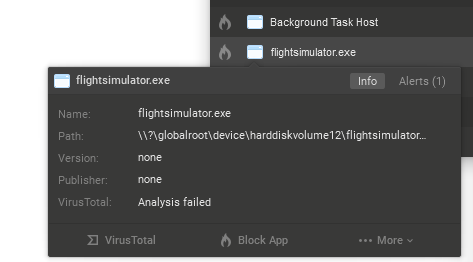 The firewall is in no way connected to traffic monitoring, so what you’re saying should be technically impossible. Firewall settings should not matter when it comes to monitoring traffic because it’s a completely different API that’s used and it can’t cause issues with the network monitoring. It’s more likely there just isn’t any traffic because the game is blocked.

@bebramsa Is your firewall on or off?

I will report this to our team. Thanks for these details.

@Ken_GlassWire I haven’t enabled the firewall yet, I’ll test it out later if I get a chance!

From an old fan of MS Flight Simulator, I thought MS shut down the Windows game studios years ago? Any news to share?

Hello. Thank you for a great program.

We need your help to solve the issue. We see the game is paid, so we see we need to buy it to test. We were hoping maybe you could help us before we buy the game. Could you send us logs?

@shadeless I’m embarrassed to say I sent you logging instructions for our older software. Please do this instead: Install the latest GlassWire version. Stop the GlassWire service at the Services tab of the Task Manager. Open C:\ProgramData\GlassWire\service\glasswire.conf as Administrator. You should not add anything to that file, just change a single parameter: LogEnabled = true Then you should save the file and restart the GlassWire service. The log will appear immediately …

i tried collecting logs, but after stopping GlassWire Control service, placing log.conf, starting everything again and reproducing the issue, the log folder is empty.
I think I did everything correctly, also tried specifying a different path within log.conf. 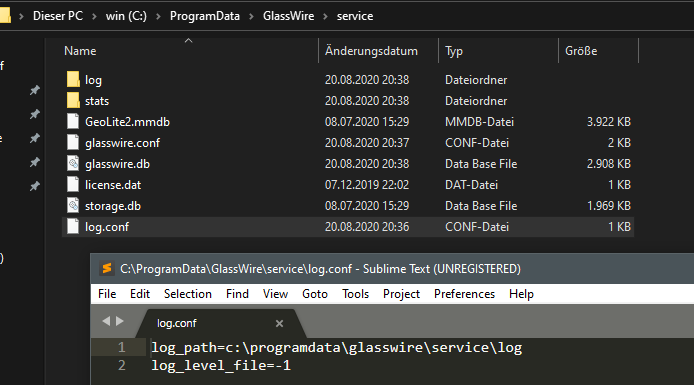 Not sure what I’m doing wrong.

Is it possible the .conf file you created ends in .txt? It should end in .conf.

Windows doesn’t show file extensions by default, but you can change a single setting and make Windows 7, 8, or 10 always show you each file’s full file extension.

It is definitely ending in .conf, i have file extensions enabled always (you can see the other extensions in the screenshot).
Log level -1 is correct, right?

Yes, that is correct. I will ask our team if they have some ideas.

Same problem here, when the firewall is on it doesn’t connect even releasing MFS 2020.

In case you missed it, please be sure you’re using our latest software. It does solve the issue for some problems with this game, but not all the issues.

We are actively investigating this issue.

Just checking in to see if someone could send us logs for this. It will help us diagnose the issue.

I’m embarrassed to say I sent you logging instructions for our older software. Please do this instead:

… happy to send the log somewhere if you tell me how

With the new instructions, I managed to also get some logs. They show the same thing as Trekkys.
I also tried scanning the app again with the integrated virustotal scanner which also shows in the log.
In my unqalified opinion, I’m pretty sure the issue is the strange path formatting that leads to issues when trying to add the rule to the windows firewall ruleset (and scanning in virustotal)

Please send the full log file as an attachment to our helpdesk email. It appears we cannot get all the info we need from the copy/paste for some reason.
https://www.glasswire.com/contact/

I’ve now bought an Elite license so if you need more firewall logs etc. then let me know!