No, we are changing some things with our backend for Mac, and that update for Windows will come simultaneously and have similar tech/changes.

Can’t wait for Glasswire for my Mac! I love this program on my Windows PC.

No need to apologize Ken…I appreciate that there will be Glasswire for the Mac! Bravo!

Sorry but the Mac app is delayed further. We hope to have it out in the fall, or by the end of the year. The Mac driver is complicated for us so it’s taking some time. I wanted to make sure everyone knows the status.

It’s also possible we might bring on another Mac developer to speed things up, so anything is possible. Thanks for your patience.

Most of my physical machines are running some variation of UNIX (SmartOS, PfSense, FreeNAS). All of my virtual machines are Linux/Debian/Ubuntu/Mint. My workstations are Mint. I have 3 Windows PCs (2 my daughters use for gaming, and 1 is hooked to the TV in the livingroom). I can’t see the value of paying for a subscription on the 3 Windows PCs used strictly for leisure. I can see the value of buying a subscription for all of my UNIX/Linux Servers and Workstations. In my workplace, Ubuntu has just about taken over on the server end. We still have Active Directory, Exchange, and Windows Workstations, but so much of the important items are done on Ubuntu VMs.

Hi Ken, Does it still look like you will have the Mac version by yearend?

Yes, it should show up on time. Thanks!

Ken, Great news! I will be first in line to purchase it. Please let me know as soon as it becomes available.

The Windows/Mac codes will be cross compatible.

I think your wrong on that since all Android’s are Linux based and alot of companies are going Linux for security reasons since windows is losing security.

I think that you are conflating a lot issues which means you can’t see that the GlassWire team are making good decisions here.

The following points mainly rely on one wikipedia article:
https://www.wikipedia.com/en/Usage_share_of_operating_systems

Edit: If anyone wants to discuss this issue further then I’ll move it to a new topic so requests by users asking for Linux / Max support aren’t swamped by longer topics about the wherefores and whys.

GlassWire is primarily aimed at end-user and endpoint devices and not for servers.

You will find that Linux has a tiny marketshare for end-users hence it is a lower priority for the GlassWire team: 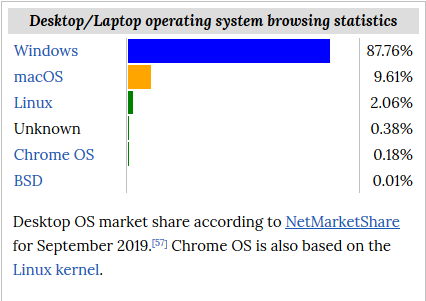 If we look at server distributions, then Linux has dominant marketshare on web servers but most of those servers will never, ever be candidates to use GlassWire:

The priorities so far have been:

We can use web client marketshare statistics to indicate where they should be putting their focus: 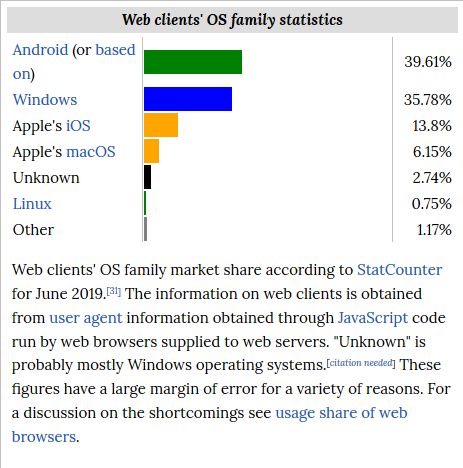 Apple iOS has been bypassed despite having nearly 14% marketshare because of feature limitations:

@tmcleod32 We probably will at some point, but iOS does not allow traffic stats per-app so it may not be as cool as the Android version.

Despite the feature limitations, GlassWire iOS will still be a better option than Linux.

What type of phone do you use, iOS or Android? GlassWire General

I setup some polls that expand on your original question. They’re more detailed just because I wanted to try out the poll feature for myself

. Only the main poll is public. All four polls are limiited to a maximum of three multiple selections. The polls are: Smartphone OS Android version iOS version Windows Phone version @Ken_GlassWire, if you don’t like them then please you move this to a new topic. Smartphone OS poll Compare the result with IDC market share for the year to mid 2016 …

Linux is way behind at about 1% markethshare so it is probably not worthwhile doing this unless the vast majority (e.g. more than 95%) of the coding is the same as the Android and/or macOS versions.

Along the way, Android web client numbers have passed Windows but a Windows version would probably still be the most attractive proposition to start first because of having greater control over features, licensing and pricing.

Linux-based does not mean able to run Linux applications

Application developers have to use many middleware APIs that are not Linux-compatible. So the application code differs between different Android-variants and different Linux-based variants. Being a Linux-based OS does not mean that it will run Linux applications, or vice-versa.

Here’s one example. The Chrome OS used on the Google Chromebook has increasing end-user marketshare and is Linux-based but has not guaranteed that it is able to run native Linux applications. The following link leads to a 2018 announcement of increasing compatibility but notice that this feature is being retrofitted:
https://www.wikipedia.com/en/Chromebook#/Integration_with_Linux

By the way, some marketshare statistics for Linux appear to include ChromeOS even though the applications have not been cross-compatible.

We have no MacOS beta. Sorry for any confusion. Thanks for your feedback on making a Linux version of GlassWire.

will there be a linux version for sure??

I am voting for Linux KDE.

There is new app for KDE plasma-systemmonitor: 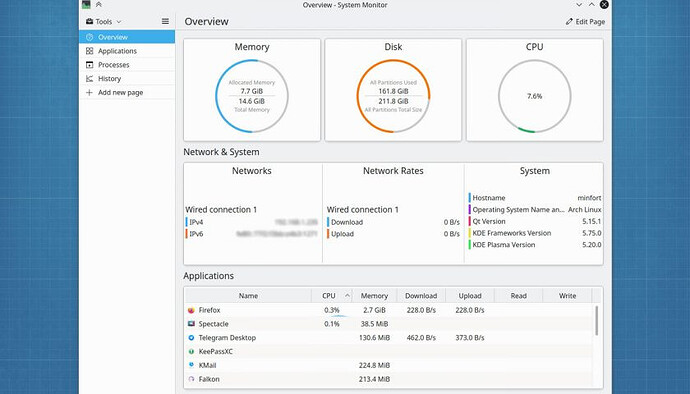 grafik840×480 55.7 KB
It can see which app uses network traffic.
It is possible for future like Glasswire.

Plasma System Monitor is a new system monitoring app in development for the KDE Plasma desktop. See what it looks like and learn how it works.

Please support Linux. Thanks! We want to donate you.

Thanks @Azenis, we will check it out!

Where did we promise a Linux version?

I found that OpenSnitch is an excellent Firewall app for Linux and the good alternative of Glasswire.

Today we will talk a little about OpenSnitch which is a port of Little Snitch and this, in turn, is a firewall developed exclusively ...

It uses your own application rules and an automatic notification popup asking you to allow or deny an app connection, when the connection appeared in network.