@Blofeld Sorry about the problem. Could you give more information about what GlassWire version you’re using? Go to the top left GlassWire menu and choose “About”.

As we move from a different database structure in 1.2 from 1.1, if you’re having this issue an uninstall, reboot, and clean reinstall should solve the problem. Then as more users migrate to 1.2 this problem should go away.

Another reason for this problem is that some antivirus products give false positives and stop our service from running. If you see an alert from your antivirus along with GlassWire’s graph not working then that may have been what happened. If that’s the case please let us know what antivirus you’re using so we can ask them to update their white list.

Didn’t notice any alert from Avast.

Did uninstalling, rebooting and doing a clean install help? Sorry for the problem.

Yes, and I also had to activate again.

The following information may not be but who knows:

I was restarting after working on another network. I have done this many times without any problem. The sequence of actions was:

It may be a coincidence that “The GlassWire service stopped running” on my other computer which is a remote server and remote client to my main computer. “Restart GlassWire” does not work so I am going to reboot.
Edit: This problem started 29 May between 14:00 and 14:05. It appears unrelated.

I have this problem again when GlassWire stops logging data and I then Exit and run GlassWire from the Start menu:

1.2.64b Data not logging (previous title was Usage view not updating)

Again, the two computers develop problems on the same day. It seems more likely that the failures are related but not tightly coupled.

These problems have been going on for almost 2 years without a fix?

I just installed GlassWire yesterday and this morning when started, it went into the visualizing network routine. I went to the task manager, ended the GlassWire process, then restarted it. Seems to be working fine now.

With all these problems,what assurance do we have that we are getting accurate usage figures from it?

If the GlassWire service is quit then GlassWire isn’t reading any usage at all, so your usage is not accurate.

If that doesn’t solve the problem please email us https://www.glasswire.com/contact/ and we’ll ask you to send us some logs to figure out why the service is quitting with your PC. Do you use Nahimic audio software by chance? If so they just released an update that should solve this problem.

Like I said, I just installed it yesterday. I didn’t say it quit, I said when I started it this morning it went into “visualizing network” and wouldn’t do anything else. I haven’t seen this error often because this is only the second time I’ve run it.

I was pretty sure that if it isn’t running it’snot reading usage, what I asked was, if it’s had so many problems, how do we know how accurate it is?

Please email us if you feel comfortable trying a version that would allow you to email us some logs, then we can figure out what happened.

Our service doesn’t start again once it is quit, so if your GlassWire is working then it is accurate. If your service has quit then of course your stats would not be accurate since GlassWire wouldn’t be collecting any data.

If you have any debug logs on your desktop from the crash please email those if possible. Thanks.

I have been attempting to recreate the conditions that I thought might have been causing the issue. That didn’t reproduce the “Visualizing network” problem so I’ve no idea why it has happened. But as it appears to be intermittent it might still recur.

I expected this problem to occur again and it finally appeared on 1.2.73.

The circumstances are the same as at least two other times that I’m certain of:

I was restarting after working on another network. I have done this many times without any problem. The sequence of actions was:

The only difference this time was that I didn’t check GlassWire for at least 12 hours after restarting my computer.

I’ve just realized that the screenshot shows GlassWire as “not responding” to Windows. I don’t know if that was the case in the past. 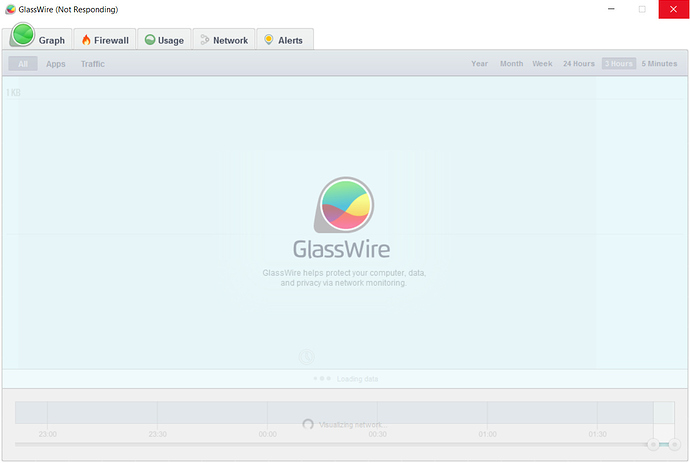 I haven’t had this problem for two weeks now despite disconnecting from one network and reconnecting to another network many times. I’ve also been trying the different power states when moving between the networks just in case the problem is related to a change in the power state:

That’s great news! Hopefully this problem is finished. By the way, we just released an update this morning.

Downloaded the latest update, thanks.

I’d be surprised if this issue is finished but I’d be happy if it quietly disappeared. But last time it took a month to show up again so it may still come back.

@Remah A new update was released today, please give it a try.

On Saturday at 3.05pm GlassWire stopped logging data. I didn’t notice until 8pm today when I noticed that GlassWire was stuck “Visualising network”.

I exited GlassWire and when I restarted it was stuck on “The GlassWire service stopped running (Restart GlassWire)”. In Task Manager GWIdlMon was not running. Killing the GlassWire control service and restarting GlassWire did not help.

I then restarted Windows and GlassWire is now working.

The Windows system event log also has a warning and I notice that GlassWire is no longer activated:
“Name resolution for the name activate.glasswire.com timed out after none of the configured DNS servers responded.”

I don’t know what to make of this. If I hadn’t had problems like this before I would assume that it might be related to problems I’m having with Windows 10 since the Anniversary Update two weeks ago. I am planning to do a clean install to revolve these issues.

If you want to email our contact page the dump files we can probably figure out what’s happening. Thanks for your report.