At present the Block All notification window is placed in the bottom right corner of the screen just like a normal notification. 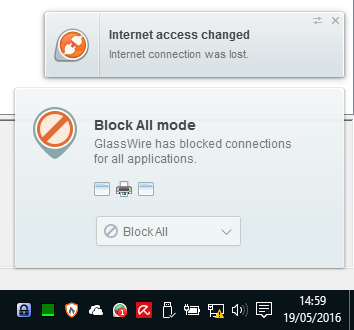 The Block All window is not closable or movable so it interferes with the display of other programs.

It does not appear in the Windows Action Center which is an obvious place to have a major notification.

It cannot be turned off by the Windows notification settings.

There is no warning in the main GlassWire window. It seems farcical to me that I can be using GlassWire and the only place I can see Block All set is in the Firewall tab. I guess that is why the Block All window is made persistent.

At present, there is no record kept of blocking except the consequent alerts “Internet access changed” and “GlassWire client disconnection”. Who can remember when they turned blocking on when are reviewing GlassWire history?

We’ll consider some changes for 2.0, but we have to make this window big and unwieldy because we worry some users will think GlassWire broke their network access and they won’t know why or how.

But having that window possibly blocking other information is not good. I agree with Remah that putting this notice on the Glasswire window or at least making it movable is needed.

See an example of relevant graph data being obscured by the block window:

Question: Why is the NetBIOS Naming Service still broadcasting and not blocked?

Incidentally, I picked it up because I cleared all history after blocking. There’s also some Other traffic for Host Process for Windows: [image] When I first blocked all the block window initially obscured the small amount of data not blocked. It covered the latest data on the graph view and the slider graph: [image] With such small amounts of data it would also be difficult to pick up on the usage tab. I found it because I cleared all history after blocking all. This made the small amount o…