I know this is probably a weird issue and I’m not even sure that it is from Glasswire. I have been constantly getting this threat alert even after reinstalling my operating system for unrelated reasons. I also use shut up Windows 10, which could be the cause of the issue though I’m unsure. I have run scans with Malwarebytes finding no issue whatsoever if that helps any. I am just not sure exactly what is being blocked and considered a threat. 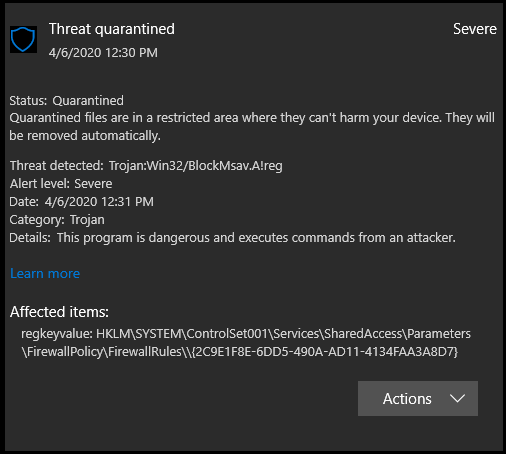 Any advice would be greatly appreciated!!

If you go to our firewall do you see that Windows Defender or some other security related service is blocked? If you unblock it and scan again does it solve it?

I have heard of that other software but I’m not intimately familiar with it. You may want to see if they have a setting that blocks Windows Defender or Malware checking and if so maybe allow that app to connect.

I believe that it was the other software causing the issue because I denied sending samples to Microsoft if they thought a file is malicious. Do you happen to know any way to white list an issue so you don’t keep getting notifications about it within defender? Thank you for the help!

That’s interesting, seems like the same issue. Any ideas @Ken_GlassWire ?

Thank you for bringing that up @TripleHelix

It depends. We had this issue but we made changes to GlassWire to solve it. But it’s possible Microsoft made another change to make it re-appear.

Are you blocking any parts of Windows Defender with the GlassWire firewall, or no? If you are not then it isn’t related.

If you are, then it’s a known new issue that will be fixed once again in our next update. But to solve it quickly just unblock that part of Windows Defender.

Thanks for posting @TripleHelix.