1.2.64b Data not logging (previous title was Usage view not updating)

Now GlassWire should have dropped some crash dumps on the desktop, did it?

Unfortunately, there is nothing on the desktop:

Did it stop logging on a remote server or on the local installation? If it’s remote, then perhaps the remote server is the one that is crashing? If so you’d need to have the debug version there.

I have installed the debug version to both computers, as I said above.

At present, both computers (MA03 and MA04) are remote servers and they are monitoring each other.

MA04 is my primary laptop and MA03 is my secondary.

In similar situations in the past, GlassWire stops logging data on both computers within the same 24 hour period.

I have restarted Windows and GlassWire is now reporting data and all alerts.

Did you see any debug logs on the desktop you can send us on any of the computers?

No dumps to the desktop.

Does the debug version of GlassWire keep an internal log that would be useful instead?

If GlassWire hasn’t crashed then you shouldn’t see any dumps. So now we wait for your GlassWire to crash.

So how will you track down why GlassWire stops logging network traffic and many alerts? It might never crash.

I guess that would mean the update fixed your problem, so it’s not necessary. But let’s give it a week if you don’t mind and see what happens.

The problem is not resolved. GlassWire stops logging data. That means the Graph and Usage views are empty. I get none of the usual alerts related to network traffic and applications because GlassWire is not logging any network traffic.

Please confirm if this is correct:

GlassWire has stopped logging for you currently and your views are empty, but on the desktop of that PC you don’t see any debug files? And on that PC you are using the debug version of GlassWire we emailed you? Please confirm.

As I said above, GlassWire stopped logging on my MA03 computer. I got no debug./dump files. I restarted MA03 and GlassWire is working again:

I have installed the debug version to both computers, as I said above.

At present, both computers (MA03 and MA04) are remote servers and they are monitoring each other.

MA04 is my primary laptop and MA03 is my secondary.

I have restarted Windows and GlassWire is now reporting data and all alerts.

When GlassWire stopped collecting data most alerts stopped but I was getting alerts for:

@Remah
Let me discuss all this with our dev team and see what the next steps are. Sorry for the confusion.

1.2.71b has been very stable for me but the data logging problem has now appeared. The Graph view, Usage view and mini viewer show no data: 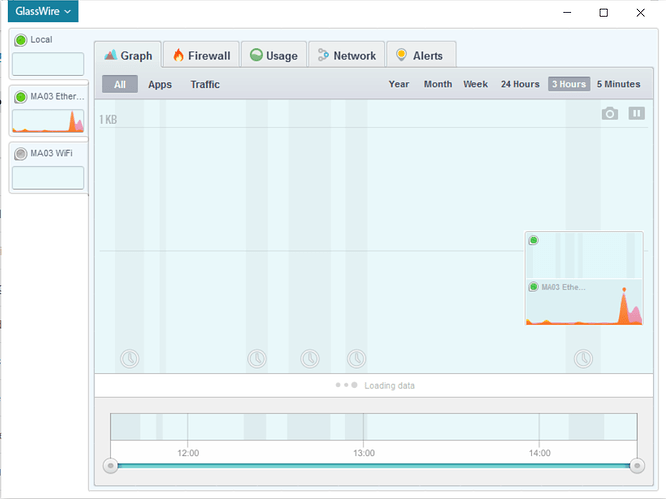 The problem may be be related to shutting down a computer on one network/adapter and starting up on another network/adapter. With 1.2.71b I stopped shutting down and restarting my computer when I changed locations. Instead, I let my laptop sleep and woke it up on the other network. This week I have gone back to restarting my laptop and the problem has reappeared the second time I did this.

Email us if you’d like to try a version with logs so we can figure out what is happening. Thanks.

I just realized that there is one other different behavior. When I have rebooted and connected to the other network, I have exited Microsoft OneDrive on both occasions. I don’t think that is related but I’ve seen stranger causal relationships than this.

I’m also not a fan of OneDrive and with the latest Windows update I also exited it, so I don’t think it’s related but I guess anything is possible.

Windows 10 includes OneDrive, but if you’d rather not see it, there are several ways to disable OneDrive and remove it from File Explorer on Windows 10.

I am a very happy user of Microsoft OneDrive - 8 years has gone real fast.

“Exit” is the technical term for ending or closing a running process/program. It doesn’t mean that I uninstalled OneDrive or disabled its automatic startup.

2. Computers To terminate the execution of (an application): exited the subroutine.

I exited OneDrive for two reasons:

I agree with this Remah. “We’ve crossed wires here.

I am a very happy user of Microsoft OneDrive - 8 years has gone real fast.”

But don’t think that OneDrive is not a PIA for me! Constant demands to re-enter my pw or to logon again. Constant syncing issues which, when finally resolved with the Anniversary update, then stopped syncing properly (some stuff just gets left out).

Probably my fault for not pursuing this with Microsoft, but there is so much to do that it just frickin’ put up with it.