When the Firewall is currently set to “Ask to Connect”, there are only two options “Allow” or “Deny”.

Please add the ability to also “Allow Once” and “Deny Once”.

If we click Once, we will be prompted again the next time the app tries to call home.

Clicking the “Once” option would give us the ability to see how active and persistent an app was trying to call home.

As it is now, once we click Allow or Deny we lose all sense of the app’s outbound “desire” to call home.

The only way to monitor an app’s desired activity is to manually delete the app from the Firewall list after each time we click Allow of Deny.

I’m wondering how you envisage this actually working. I’ve never seen this in a firewall so have you got an example that the rest of us users could see?

FYI, similar requests were made in 2016. I’m guessing it is either a complex feature or not considered important enough. If it was simple then I imagine the GlassWire team would have implemented it in the 2-3 years since they said they were interested:

When the application runs the first time and the allow connection request pops up. Place a third button that says “Allow Once”, this will allow that application to access the internet for the entire time it runs just this time without staying allowed the next time it runs. This way it does not need to be entered into the allow list and clutter it up. Update applications and temporary applications, and so one would fall into this list. If an update only runs once on your computer you don’t need t…

Hello. I recently upgraded to Glasswire Pro. I continue to love the base product, but noticed that something felt missing from the pro version: a limited allowance while in “ask to connect” mode. When a new application pops up, asking to connect, I’d like to be able to allow the application once. Further, it’d be nice if a timer could be set on the expiration (rather than waiting 'til the application pops up again). Either of these “allow once” options would be great. I don’t know which is easi…

I have a philosophical question about security. Why would I want to allow an application to communicate when I might soon be blocking it? I would think I’m better off testing the application in a test environment such as a sandbox rather than allowing it connect at all. If I want to see what it does then I can already allow it and then block it at a later time.

The following are some questions I have about the technical issues.

I have “Windows 7 Firewall Control” by Sphinx Software, on my old Vista laptop. Recently I purchased a new Windows 10 laptop and chose Glasswire.

Windows 7 Firewall Control (and their Windows 10 version) have the “Apply Once - For current launch”.
Clicking on this adds a temporary firewall rule, which is automatically deleted when the app is closed. 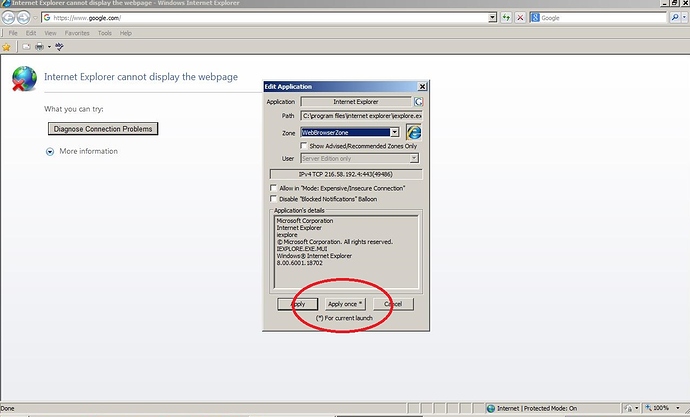