I believe the title describes perfectly well what I am requesting for. I would be glad to see GlassWire being able to let users ban/block specific (custom) websites and IP addresses/ranges (for this one, it would also be nice to be a button to add a pre-defined list… a system of recognising blocklists in the same way as PeerBlock does - something like a program to replace PeerBlock) and a new tab in the program where every blocked website/IP is logged. I hope you’ll find my recommendation/feature request really nice.

We are considering adding this in the future. It would be useful to be able to block ads for example.

Yes! I really love the GUI of Glasswire, I was considering buying it but it really was this feature that has kept me from it. Please implement this and you will have another lifetime user!

Further, not only recognizing blocklists, but being able to download them from a url and apply them (like PeerBlock).

If you are not familiar with the managed IP blocklists which are available, some can be found here:
https://www.iblocklist.com/lists

This would greatly increase the functionality of GlassWire and add an additional security layer for users.
(Sorry, couldn’t post active urls as a “new user”).

Further pondering of the IP blocklist use, here is a good example of how a user can begin creating his own custom IP blocklist just by right clicking and blocking on a host in the usage tab: 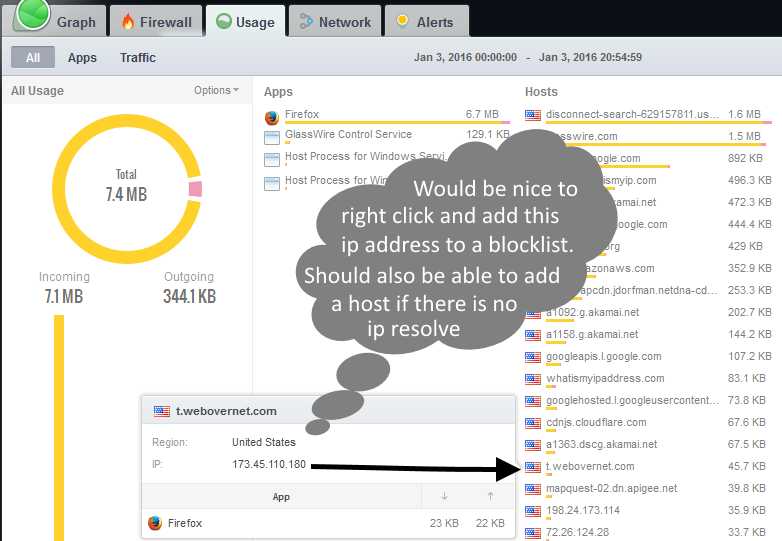 Any idea on when this feature might be implemented?

Here is a script for windows firewall to block IP addresses and country network ranges.

@glasshole I like the idea of how you can block a host that way easily. It’s a cool idea for the UI.

We’re going to release our 2.0 update, then work on this soon after.

Those nonpreventable 2.5 GB+ Win 10 updates got me really really bad. Even though I closed related win update service, it still continue to connect that microsoft update server!

I like the fact that GlassWire is user friendly and very easy to use, but when i try to close that particular connection from GlassWire -> Firewall, there is no option for single service, it closes all the Windows services so i cant make any http connection.

Maybe not totally custom ip but we sould be able to select and block subservices from Firewall - Apps -> Hosts. Please add this feature at least, thx…

I’m just going to go ahead and throw my hat in the ring requesting blocklist support. I especially liked “Glasshole’s” idea of just being able to right-click and block within the interface. I’m just now becoming aware of how pervasive Windows 10 spying really is, and now learning that NVidia is doing it as well.

Windows 10 is pervasive with all its telemetry turned on out of the box. I would use something like O&O’s Shut Up 10 to turn a lot of this spyware off.

You have to keep it updated and check every once in awhile to see if your settings are the same. Sometimes after windows updates, Microsoft turns the telemetry back on.

If you don’t use any Microsoft services (app store, Bing, Edge, Skype… Because they will be blocked.) You can get even more agressive and use a host file like this one:

Still working on it. Sorry for the delay.

It’s on our todo list and we’re actively working on it.

You can’t yet do 2 or 3 in GlassWire but, In the meantime, you could use scripts to do this, e.g. for IP blocking:

Any idea on when this feature might be implemented? Here is a script for windows firewall to block IP addresses and country network ranges.

I totally agree that Jetico Personal Firewall is way less user friendly. I used it for several years back before Windows Firewall with Advanced Security came out.

For anyone else who reads this, a good reason for switching from Jetico Personal Firewall is that it is no longer being developed - development ceased a couple of years ago - and only supports Windows versions up to Windows 8.

(It says I can’t post links, so whenever you see @@@ in this post, prevent it’s the website for a hypothetical program called XYZ. So, maybe something that sounds similar to xyz dot comma.)

Since I see you’re working on this, I wanted to describe what I’m looking for in a program like this.

I want a program which by default blocks all in and outgoing traffic. (GlassWire’s “Ask To Connect” mode looks to do this.)

When a program tries accessing the network, I want a popup describing what it’s trying to do. GlassWire’s “First Network Access” popup shows the name of the program and the IP address. It should really also show the reverse lookup, as it does in the Firewall tab under Hosts. Otherwise, a lot of the time when this popup comes up, I’m going to have to do manual reverse lookups which is going to get really boring, knowing GlassWire already has that information internally.

Here’s the MOST important part. This popup shouldn’t only have “Allow” and “Deny”. It should have more options. Like, I don’t want XYZ auto updating, so block XYZ from accessing @@@. But, chrome, which I’d probably give an “access anything” approval to should be allowed to still access @@@. If XYZ tries accessing another site, I should get another popup, and maybe this time I’d say to allow all access. This would be secondary to the block on it accessing @@@, so XYZ could access anything except for @@@.

Basically, I want to custom tailor exactly what a program can and can’t do on the network, very specifically to that program.

new to GW using it for 2 days, I’ve been using proxifier to block hosts when I’m using VPN but found out GW identify VPN as local connection easily and the only thing I need is this feature so how many years does it take?