I’d like to see Ad Blocking come to GlassWire. The previous firewall I used (Agnitum Outpost Pro) had this and it was wonderful.

This is exactly what I would like to see in future versions.

If Little Snitch 4 can do it, you must also do it

IT include the Map and all functions that go with map.

Not only block all, also block upload data only (No server) and Block Download only, block both.

Like i said, take a look over Little Snitch 4…Zone Alarm and Bit Defender and add what miss to Glasswire…i will not make full list myself because lack of english

Is there an option to delete the log file to free some space in the storage drive? If not please include it, and make it easy for the user to find it and show the size of the log file.

At Ken_ClassWire’s suggestion, the following is copied here from the general discussion. I appreciate the very fair response so far to my deliberately rather boat-rocking post. I have updated my original post as placed here, on the basis of prompts from some of the nice people who’d responded to my original post.

I do love GW - I really do! It’s a brilliant program for which, at least from my perspective, there is not yet any worthwhile alternative.

Please, we now have the long-awaited GW 2, and, oh my, its ‘firewall’ is indeed improved - but it is STILL only a TOY one! Please excuse my very real exasperation and scathing view of the travesty that the GW ‘firewall’ still is. Okay, my use of the epithet ‘toy’ here is figurative, but is necessary in order to hammer home my point to some rather deaf ears somewhere.

Seriously, I was assuming that at least when GW 2 came out I could dispense with Windows Firewall Control (WFC) and have a proper front-end for Windows Firewall right there in GW. And what do I find? – It’s only been tinkered with round an edge or two, and nearly all of the requests for a proper firewall UI in this forum have fallen on deaf ears!

It is clear that whoever chooses which features are to be included in GW has no intention at all for GW to have a genuinely useful or competitive firewall UI. So, having reverted to WFC after some 15 minutes of incredulity at the lack of useful change in the GW ‘firewall’ department, I now assume that I shall have to continue using WFC (with the GW ‘firewall’ switched off) indefinitely.

Here are the primary necessary features that I can think of now, which are still needed in GW’s firewall UI (there will be other important things that I haven’t remembered here), which are all fully implemented in WFC.

I haven’t time to give anything like a complete rundown, for WFC has masses of additional facilities and options available, but I think that the above list should give some idea of why I most definitely will not be using the GW ‘firewall’ in the foreseeable future and sticking with WFC as my firewall UI, while greatly valuing GW for all its other functions.

So, for the foreseeable future I have written-off the GW ‘Firewall’ as a travesty, a toy, and will not spend further time in concerning myself with the odd small ‘improvements’ that may be made to it. Basically it needs complete redesign to be a serious proposition as a firewall UI.

…Actually, having said all that, I would be not be sounding quite so demanding if the GW ‘firewall’ were described in the first place in such a way as to make it clear that it is NOT a full firewall interface / management system (for a start, stop calling it a ‘firewall’, because that tells everyone that it is a firewall, which is is not really (in any case the real firewall is Windows Firewall, so anything managing it should be called what it is, and not a firewall!) - and sets up false expectations.

Maybe something like ‘some basic / elementary firewall features’, but also making it clear that one needs other software for full firewall management. But even then, as other posters have pointed out, many basic UI features are currently lacking and much needed even for GW’s very limited firewall management functionality.

Sorry to have cause to sound a bit bruising on this occasion, but somebody at GW needs a hefty kick up the butt to get them thinking more clearly about the real needs for a firewall UI, and about how they describe GW’s firewall-managing features in their documentation, program interface and promotional material without misleading people into thinking GW would give them a proper, fully-featured firewall.

Just found out this thread so I want to post some request in proper place.
1.I really think Firewall tab’s UI need to separate block and non-block into 2 tabs or have 2 separate columns.When you have around 20-30 blocked it will be troublesome to scroll up and down all the time.
2.And it will be great to be able to delete old apps from the firewall list, which is uninstalled and not existed anymore.After a few time updates the app there will be 5-6 same icons in the list and it’s hard to know which is which.

On the FIREWALL tab, when we see some activity of some process, there is a small icon with the (+4 MORE) that when we click it, shows a list to WHERE the process is connecting to. Can devs please add a small BLOCK/BLACKLIST DOMAIN feature so some the firewall blocks ANY data being sent to any particular site is blocked.

eg. Firefox sends random packets to Akamai even when we are NOT using Akamai (thanks to our browsers sending out packets without our knowledge). Why permit 3rd parties to sniff our information without consent? It’d be a nice feature to be able to blacklist these domains so nothing is sent out, and also reducing bandwith.

We’ll also need a list of all blacklisted sites, so we can tweak/unblock them as needed later.

By Default, GW PERMITS all network traffic to pass through. We should have an OPTION in preferences, to:

We also need a toggleable BIG RED BUTTION somewhere on the UI somewhere that will BLOCK ALL TRAFFIC in an emergency.

Please go to the GlassWire firewall tab and choose “Ask to connect” or “Block all” modes with the 2.0 trial.

For your other comments, host blocking is a popular request and we’re working on it.

and I can buy a copy

I think I’ll only need the Pro, I only have a home setup, no servers or stuff like that. This will be perfect to put alongside Voodooshield as realtime protection… When we have multi-user!

Is there an option to delete the log file to free some space in the storage drive? If not please include it, and make it easy for the user to find it and show the size of the log file.

Not a bad idea, but I’d go a bit further: how about logging up to a given size, say 50KB, then close and archive while starting a new file. Date/time-stamping the archive files would also be useful. I’ve often pondered the concept of automatically deleting older archives–say 6 or 12 months–but OTOH the moment you delete the file you find you need it! I think this must be up to the user really.

A manual method could be enabled: if the log file does not exist, the app builds a new one, so you can simply pull the old one (with GW stopped!!!) into an archive folder. Could GW survive tooth extraction without anaesthetic?

I really want to see custom color. open a color selector for DL/UL and use those colors.

I’would like to manage directory in firewall tab to put application by family class.
For example a directory Adobe, Microsoft, etc.
By this way it’s more easy to find application in this tab. 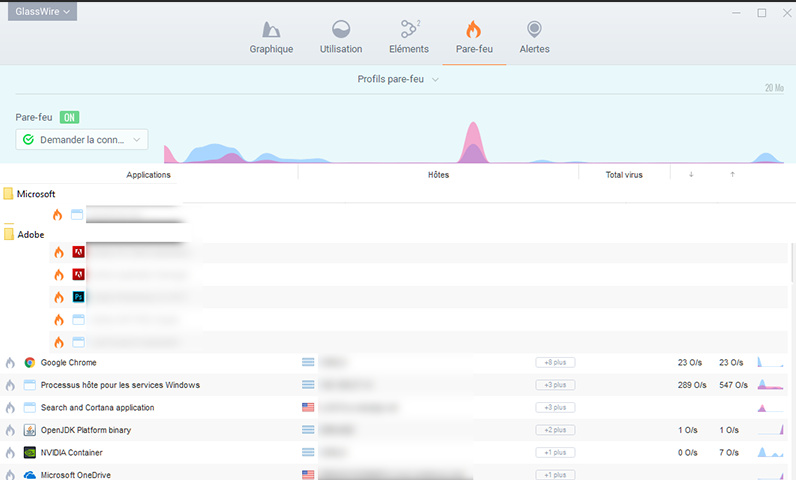 Ohh and thanks for your soft. I really like it!
I took the Basic to encourage you and have some features.

I’ve downloaded the software before and I was really impressed with some of the features of it, however I also completely agree with your points so far.

I don’t think that it’s really a firewall at present. What I see it as, is a kind of process explorer for networks with a few nice touches around it; for instance the integration with Virus Total is a really good idea and it visualises traffic pretty nicely - although I admit that this could be better.

So far my suggested areas of improvement are:

one thing unless it was already mentioned would be a way to allow/deny this now for a short while but keep it away from the list (or delete later) and if needed ask again, especially with setups it’s annoying to have a metric f-ton of entries of setups or whatever genericly named applications that wanted internet, because they are on the list no matter whether accepted or denied.

Please remove the Inactivate Apps area as i find it a total waste.

Firewall tab request: Move the ‘Delete App’ function (small ‘x’) in the center of the firewall list into the ‘Info’ popup for the application icon, and group with the ‘Virus Scan’ and ‘Hide App’ buttons’.

I just found this today. Well hidden in an odd place as it is now…